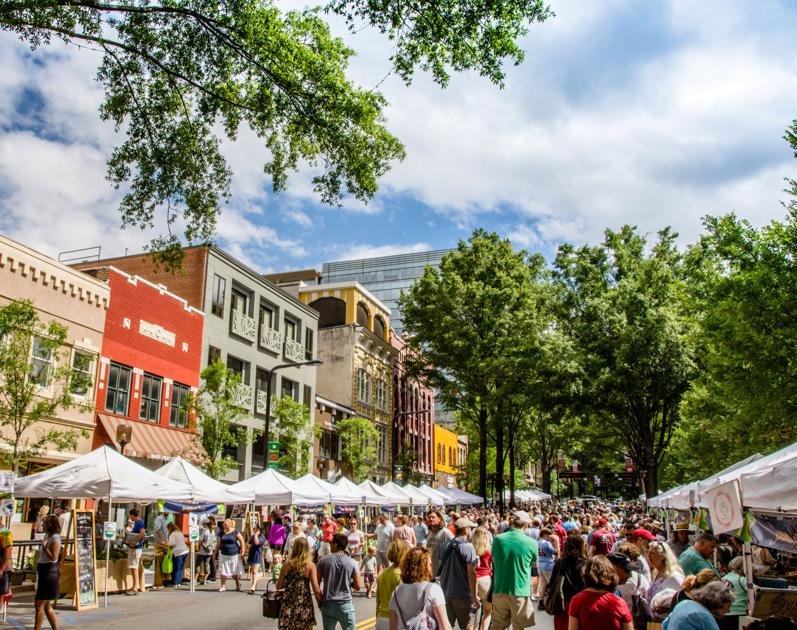 For 75 years, the Army-Navy store in downtown Greenville had occupied a 6,000-square-foot space on South Main Street. The business announced plans in early 2021 to relocate to Laurens Road, after selling the location it had long occupied for a reported $1.34 million.

While the new owner clearly has plans for the space after paying top dollar for a prime downtown address, the sale technically leaves a vacancy — one of many dotting the central business districts of both Greenville and Spartanburg in the wake of coronavirus pandemic that’s taking a heavy toll on brick-and-mortar retail. But as the Army-Navy store’s move clearly indicates, not all retail vacancies are created alike.

“That store is vacant now, but it was purchased, and it’s going to be redeveloped. That shows up as a vacancy in the report,” said Jimmy Wright, broker at NAI Earle Furman, the Upstate’s largest commercial real estate brokerage. “But that is a transition by an owner-operator who said, I see the best value for myself now is selling this building and moving somewhere else, and letting someone else take this ball of clay and remold it.”

According to a market report on the second quarter of 2021 prepared by NAI Earle Furman, Upstate retail vacancies continued to rise: they increased from 4.8 to 5.3 percent in downtown Greenville, and from 5.8 to 6.5 percent in Spartanburg’s downtown and west side. That despite some positive numbers in industrial and even office sectors over that same span, highlighting the difficulties retail operators face as Covid-19 continues to maintain its stubborn hold on the Upstate, the nation and the world.

And yet, Wright would not classify the situation as alarming. “There’s always going to be some vacancy; that’s inherent,” he said. “When we underwrite properties, we underwrite them with a vacancy factor built in, and the banks look for that, too. A typical vacancy factor in a multi-tenant building is somewhere between 3 and 5 percent. So these numbers are still within tolerance, although they’re maybe at the higher end.”

The retail recovery in the Upstate has also been hamstrung by other factors. A labor shortage among lower-paid hourly workers—so evident in the restaurant and hospitality industry—has forced many retailers in the Upstate and elsewhere to adjust operating hours or delay expansion plans. And soaring construction costs due to inflation has made building new retail properties less feasible than it was prior to the pandemic.

“I don’t know what the long-term impact of the current inflationary period is,” Wright said. “There are a number of factors that play into that: there’s a labor shortage, there’s a supply chain issue, then on top of that you have all these project that sat idle for a period of time. So now those are getting re-upped, and it’s just a matter of having all those circumstances hitting at the same time. So my thinking is, in the short-term, it’s going to be hard to develop new retail because of the cost of it.”

The pandemic has also changed consumer buying habits, potentially for the long term. “The Amazon effect is real,” Wright said, referring to the practice of buying online rather than shopping in person, in many areas a carryover from lockdown periods. That’s led retail business owners to ponder how they reposition themselves for the future—one some retailers in Greenville and beyond are already beginning to figure out.

Wright points to the continuing success of TJX, the parent company of brands like T.J. Maxx, Marshall’s and Home Goods, whose customers tend to shop in person for bargains they won’t find online. “They have a good model and they’re successful right now,” he added. “They aren’t totally reliant on the internet, and they’ve found the model that works for them. Others are doing the same thing, because we’re in that transitional period.”

It’s not unusual right now to see retail spaces transition from shops to personal service outlets like “financial services or beauty salons, whether it’s a lash studio or a hair salon or something like that that you can’t get off Amazon,” said Geoff Beans, also a broker at NAI Earle Furman. “It’s a service you’re paying for. The restaurant industry is part of that, but they’re having some adverse issues during the labor shortage right now.”

During this transitionary period for Upstate retail, Wright also expects a rise in service-oriented boutique stores like Monkee’s of the West End, a Greenville women’s clothing boutique that’s remained successful despite the travails of the pandemic. Again, the idea is for businesses to separate themselves by offering something customers can’t get online.

“You look at retailer like the New York Butcher Shoppe, which has a grocery component to it, but it’s also service-oriented,” Wright said of the Greenville-based company with three area locations. “You can go in there and ask for a tomahawk ribeye, and you can get one, and they’ll tell you how to cook it. They all have little differences that are designed to better serve the customer, and have more interface with them.”

Vacancies an opportunity for growth?

It its second-quarter market report, NAI Earle Furman expected the Upstate’s retail trudge to linger into the latter half of the year. The Greenville area’s trend of negative absorption — meaning more businesses are moving out than moving in — is expected to continue. “Although the state is working to reopen its economy, there is still a long road to full recovery,” the report stated.

A crucial step toward getting back to normal is filling the labor gap, Beans said. “These are businesses that need workers,” he added. “There are so many restaurants right now that aren’t open for lunch — they can’t factor in lunch because their sales aren’t as high as they want them to be, and that prevents them from looking to expand. So fixing that is really a big one right now.”

And yet, the retail vacancies in Greenville and Spartanburg might offer more opportunity for growth, given that setting up in those ready-made spots won’t require the sky-high costs of new construction. “Spots with vacancies right now, at least in the short term, are in a better position,” Wright said. “They know what their costs are currently, and they can figure out what their rates are, so they might have a competitive edge. It might be less expensive to remodel than it is to undertake new construction.”

And Main Street, the retail face of Greenville to many tourists and residents alike, remains healthy due to the city’s robust growth. The location of the former Army-Navy store, after all, will one day be home to something else. “In any stage of growth, you’re going to have some transitional spaces,” Wright said. “That’s the underlying thing: we’re growing, and when you grow, you have transition.