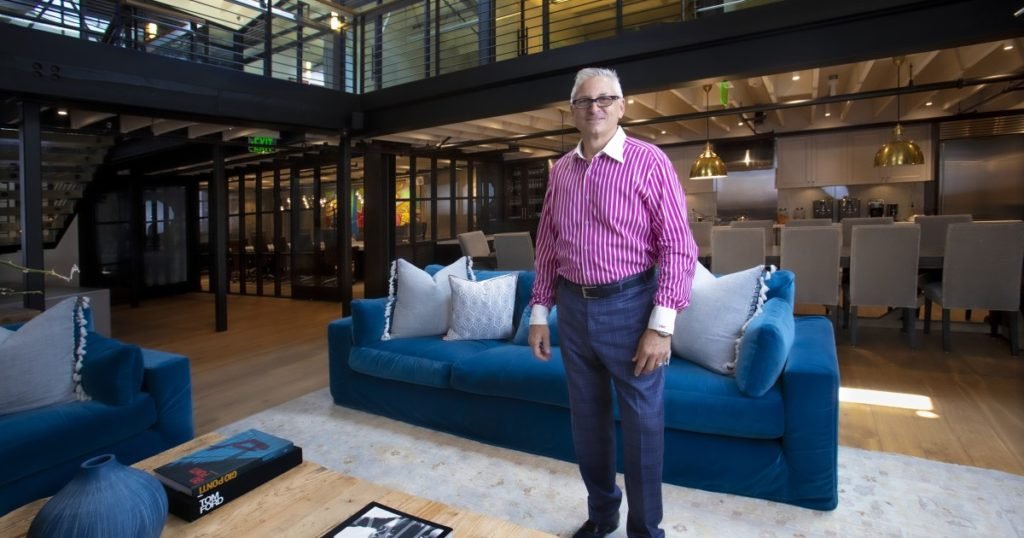 Within the next week, David Marino will list nearly 300,000 square feet of sublease office space in Sorrento Mesa that current tenants no longer need.

For Marino, a principal at the Hughes Marino commercial real estate brokerage firm that specializes in representing tenants, these subleases are an early wave of what he expects to be a tsunami of unwanted office space flooding the market in coming months in the wake of COVID-19 shutdowns.

Office space could be next.

Like many others, the bulk of Hughes Marino’s staff have been working from home since the coronavirus pandemic.
(Nelvin C. Cepeda / The San Diego Union-Tribune)

“Most companies have now realized that they can work as effectively remotely, and some employees actually like it,” said Marino. “Office tenants contemplating their future requirements are going to be leasing less space than they have now.”

That could create ballooning supply starting this summer — a surplus that might make the Tech Wreck of 2000 and the Great Recession of 2008-09 “look like a rounding error,” said Marino.

“This is going to be much more like the early 1990s when we had the Savings & Loan crisis and over-development of office buildings and foreclosures,” he said.

As a tenant representative, it’s in Hughes Marino’s interest to portray the market as favoring tenants, though Marino insists he has no ill will toward landlords.

But in March his firm raised eyebrows among building owners when it sent out an email offering to help companies restructure leases as rents “collapse” amid the pandemic.

That decline hasn’t shown up in the numbers yet. Vacancy rates are up in San Diego County, but not by a huge amount, according to real estate industry research firm CoStar.

Real Estate Investment Trusts that own office buildings nationwide are still collecting roughly 90 percent of rent from tenants — even though employees are largely working from home.

“When you look at the overall collection rate for office, it has been really strong,” said David Rodgers, senior research analyst with RW Baird. “That to me is fairly logical. Office tenants, particularly those in high-quality buildings, they put a lot of money into that space. That is home base for their operations.”

The coronavirus pandemic has potentially accelerated a trend of more employees working from home, but how will it impact the demand for office space?
(Nelvin C. Cepeda / The San Diego Union-Tribune)

According to Rodgers, the key question is how many office jobs will evaporate permanently during a recession sparked by the pandemic, and how many companies will shift a majority of their employees to remote work.

“I think what you are likely to see is businesses (that are struggling) will likely go to work-from-home because it is more efficient,” he said. “Others will take more space. It comes down to how many jobs are going to be lost.”

While it’s still in the early innings, there are signs that employers are embracing remote work across a number of industries, including tech, finance and consumer goods.

Nationwide Insurance, Facebook and Twitter are among the companies nationally that have signaled that their need for physical office space will be significantly reduced in the future. Morgan Stanley and Barclays have made similar statements.

The Charlotte Observer announced last week that it will exit its physical office space, with personnel working from home through the remainder of 2020. The newspaper aims to find new office space in 2021.

Before the pandemic, Employers offered expensive amenities to lure and keep workers. Will that continue as people return to work?
(Nelvin C. Cepeda / The San Diego Union-Tribune)

“On the other hand, you have companies that want their people in the office,” he continued. “With social distancing and the new way that they have to occupy office space, they may have to take a little more space to accommodate all of their people. So it’s too early to tell.”

For employers, having workers in the office helps to build company culture, enabling mentoring, brainstorming, collaboration, team bonding, socialization and the ability to get things done without interruption from children.

“I think what is going to happen with the office sector is you are no longer going to be a second-rate employee if you decide to just work on the fly,” said Nathan Moeder, a principal at London Moeder Advisors, a real estate consulting firm. “But in terms of office space, I don’t think we are going to have a massive cohort that is just going to work from home. That doesn’t work for a lot of people.”

About 12 percent of professionals worked from home before the pandemic, said Norm Miller, the Hahn chair of Real Estate Finance at the University of San Diego School of Business. That could easily rise to 18 percent to 20 percent going forward.

“That is not that much of an increase,” he said.

Miller estimates that rent collections are down 12 percent in the office sector from tenants no longer paying their leases, based on survey data from Pension Real Estate Association and other sources.

It could get worse before it gets better, he said.

Landlords have been willing to consider rent deferrals and other steps to keep tenants, according to brokers and tenants.

But landlords want to see business financials and audit business plans for survival before agreeing to a rent deferral or rebate. They also want to know if tenants received Paycheck Protection Program loans or any other stimulus funds — some of which can go toward rent.

Renegotiating existing lease terms is more difficult. Lenders typically must sign off before a landlord can offer significant lease modifications.

“Banks and insurance companies are generally willing to be reasonable about reviewing renegotiated leases, and to even modify loan terms in some cases,” said Miller. “But the commercial mortgage-backed securities money, that is thousands of investors that bought this pool of mortgages, and it is pretty much impossible to modify those loans.”

Not all negotiations are smooth. Mall owner Simon Property Group sued the Gap earlier this month for nearly $66 million in unpaid rent. Some restaurants and other tenants, who have seen steep revenue declines, have sought rent forgiveness rather than deferrals because they’re operating at 25 percent to 50 percent capacity under social distancing rules.

Lawmakers have stepped into the fray. Democratic State Senator Scott Wiener introduced SB-939, which would halt commercial lease terminations by landlords for a full year after the state’s coronavirus health order expires.

The bill also would force lease modification talks for restaurants, bars and entertainment venues with significant coronavirus revenue declines. It gives tenants the right to terminate leases with a small penalty, no matter how many months remain.

Whether this bill or some other legislation passes, office space is likely to look different going forward. There will be more space between employees, staged arrivals and departures, as well as possibly more private offices and partitioned spaces.

Just how tenants view these changes remains to be seen. Rents are a function of productivity, said Miller. In recent years, employers have packed more workers into smaller spaces — 160 square feet per employee compared to 250 square feet a decade ago — to get high utilization of the space.

If employees must spread out because of the pandemic, there is less utilization per square foot.

“It’s like overripe bananas at the store,” said Marino, the tenant broker. “What are overripe bananas worth? Nothing. Tenants who were willing to pay $4 or $5 per foot for something …. right now see very little value to those leases. They are in contracts that they wish they could get out of.”